Australia’s first same-sex wedding which happens to be historic, took place on December 16 after the new law came into existence on December 9.

Equal Marriage Rights Australia publicized on its Facebook page of this historic event which took place in Sydney.
The brides dressed in customary white gowns and holding hands in hands said, ‘I do’ and Kissed. 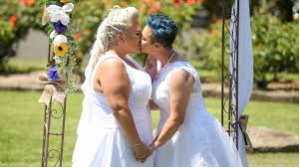 On December 16, 2017, Saturday, Amy Laker, 29 and Lauren Price, 31, ‘vow’ outside Macarthur Park in Sydney. The brides were pronounced as ‘wife and wife’ in front of 65 guests which included their family and friends.

How the act was legalized

There had been a postal survey in Australia in September by the conservative government, which happened to be passed through legislation without any religious freedom amendments. Almost 80 percent of voters that were found eligible voted for the same. And nearly 62 percent of them voted in favor of legalizing the law in support of same-sex marriages.
At least 20 countries have accepted ‘same-sex marriage’ of which 16 are European countries.

For Lauren Price hails from Wales in United Kingdom, so the couple had initially planned to embrace a commitment ceremony at the British consulate Under UK law but when in Australia the new law was passed they asked for an exemption from the typical waiting period of 30 days to marry without giving a month’s notice to Births, Deaths and Marriages in NSW because Lauren’s family had already been to Sydney for the wedding party. And it would be a loss of money for Lauren’s family to travel again so the couple got a special financial exemption.

Amy Laker came into notice when she and her partner Lauren Price became Australia’s first legal lesbian couple. They met three years ago at a Sydney bar after which their love story began. Now the couple wishes to start a family.
Amy said, “For us being legally married is more about automatically being next of kin … this is my child’s other mother, my wife.”

Now the couple plan to set off for Wales for their honeymoon and another wedding ceremony for Price’s family and friends who could not join them in Australia.

According to Australia’s Daily Telegraph, Amy’s father Mr. Steve Laker quoted, “the couple did not want their historical union to be seen as “political”. “The girls really didn’t want the focus to be on the fact that they are the first… they just wanted it to be seen as a wedding”. “That’s what true acceptance is all about. For them it’s just about love.”

According to the Herald Sun newspaper, another same-sex couple Amy, 36 and Elise McDonald, 28, wedded in Melbourne on the same day two hours later only after obtaining special permission on same financial grounds

Another couple Lyn Hawkins, 85 who is suffering from ovarian cancer at her final stages will marry Anne Sedgwick, this Sunday. Both have been together since last 40 years.